This year’s ride had a record attendance, as riders came out to enjoy the warm sunshine and late bluebells in Savernake.  Several people went along on foot or on mountain bikes to join in too, so it was a very enjoyable family outing, and parking was at full capacity.  Our youngest ever participant, was just 3 years old, and had a big fan club by the time he finished.  My husband took photos of many riders, and we also have 2 new members after the event which was a bonus.

I was very pleased that the event went as well as it did, because the marking and pre-checks this Spring had been very challenging after the gales and floods.  I had a lot of minor clearing to do with my pruning saw and secateurs, but had to ask the Forestry Commission for help with one big fallen tree on the long ride, as it wasn’t possible to get around it.  There were one or two incidents caused by markers being removed/moved, and the sunshine and dappled shade made the markers quite hard to see in places, especially as a number of riders kept their sunglasses on.  It was so warm that I arranged for water to be made available to riders on the long ride, which is 16.5 miles according to one rider who took a GPS - no wonder it takes a lot of marking!

Next year we will be using a different coloured tape which will be more visible, but the problem of people moving markers is almost impossible to control, unless WBA decided to buy me an off-road motorbike so I can whiz round at 6am before it all gets going!

Massive thanks go to my husband Andy, and Ruth Clarkson for help at the start, car park stewards Roland & Kim Bristow, and checkpoint stewards Ros Brown, Norman Beardsley, Viccie Palmer & Rita McVittie for all their help on the day.

Thanks also go to new members Charlotte Hill-Baldwin and Melissa Cole who helped to remove some tags at the end of the day. Their (the shorter ) route is shown below including hacking to the start and back home again. 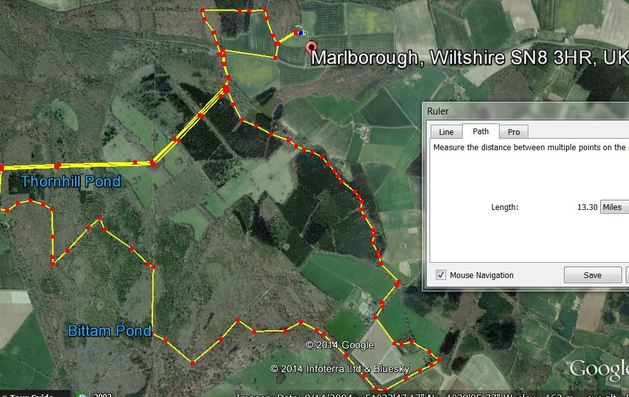 Back to Rides Round Up