Here you will find out about what the association is currently campaigning for and news about our activities. 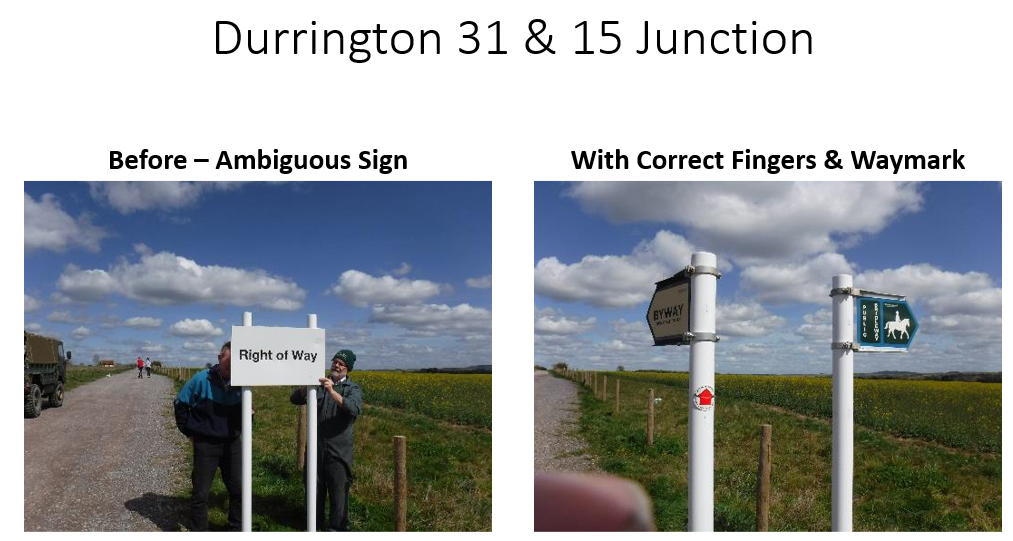 Sharing Great Work by another Local Team who cares greatly about preserving and protecting our rights of way.
The Salisbury Plain Rights of Way (AWESOME) Volunteers completed a signing day in early April. They resolved 15 issues, a proportion that they came across, heading to the next known problem.
They are still developing a plan for permanent Voluntary Restraint signs (until a route is repaired). The Green Lane Association has agreed to pay for the signs. The plan is to seek funding from Area Boards for the posts, postcrete and fixings but as this spans 8 x Area Boards, Nigel Linge, who heads op the team, is still working on how to do that.

Wiltshire Council have about 4,000 unresolved Right of Way reports. So the work undertaken by the Salisbury Plain RoW Volunteers for repairing/replacing some fallen/damaged/missing RoW signs in more remote areas is a very effective solution that you could support and utilise.

Did you know, that by changing the signs to destination signs, parish councils can apply for Area Board grants to get the materials provided to fix issues and therefore greatly reduce the costs?

Many, many thanks to our volunteers!

Charlton St Peter & Wilsford PROWs 8th May 2021
CSP 9 and WILS 13
RIGHTS OF WAY WARDENS FOR WILTSHIRE Stephen Leonard, true to his word, has undertaken a great deal of work on both the sections leading out of Charlton St Peter going north and the intersection that turns west on to WILS 13.
The overhang has been cut right back, allowing the light to get in, increased the width and made the whole experience of walking, riding and cycling along it, the huge pleasure that it used to be. The surface in some places still needs some infill and there are a couple of bad holes which someone has marked with sticks.

Summer 2018 Round Up of success stories

DIVERSION FOR 6 YEARS AT COMPTON BASSETT
An order has been made to divert BP5 for a period of 6 years to accommodate work at Hills Recycling. There were a very large number of objections to this plan, mainly from local residents; WBA was contacted by a one person who had undertaken vast amounts of in-depth and very impressive work to show that the diverted path is very likely to be under water for large periods of time in the winter due to the height of the water table.

MANNINGFORD 30
This track has been on WBA radar for quite some time. The landowner was disputing the entire existence of this path and there were several gates along it, some of which were being locked at random. We are pleased to report that it’s fully passable now, although some signs are absent and the part through the woods is slightly confusing. There are some ponies behind non-electric tape at one point, but the path is now ridable the entire length. This is great news for riders in that area.

DURNFORD, SALISBURY BP 8/2/5/26
Very soon there will be some good news for riders in the Woodford Valley area. Footpaths 8, 25 and 26 are likely to get an upgrade to bridleway status, although the Inspector has not yet confirmed the order.

WILSFORD
Wilsford has a number of problem paths at present, which occur on the same person's land. Trees have been planted next to the Millennium Way track and it’s obvious that these will encroach on the track-width once they start to grow. A locked gate has also appeared on BR10. These have been reported to Wiltshire Council and the Chairman of the Parish Council. Marden BR6 also has a gate across it.

CALNE WITHOUT 51
The landowner has agreed to a meeting regarding a re-submitted claim from WBA on a path across the Bowood estate. WBA have been trying sporadically to reinstate bridleway rights on this path for many years.

STONEHENGE
A trial of a permanent Traffic Restriction Order has suddenly popped up on 2 Byways near Stonehenge. The council are stating that the gates will be kept locked prior to Work starting on the A303 tunnel, which considering that it’s allegedly still in the consulting stage, seems rather worrying. Whatever your views are regarding this work, (the WBA committee agree that it’s a massive waste of taxpayers money), it seems wrong to block public rights of way before the final outcome has been “properly” decided.

You could help us !

From Our Chairman
In response to the entry published on Thu 20 Sep 18 at 21:15hrs, on the Wilshire Horse Riders Facebook Page and the subsequent resulting comments.

On Wed 25 Jul 18, Wiltshire Bridleways Association, (WBA) received a request from a representative acting on behalf of the horse riders of the Cherhill area, asking for WBA support for their endeavour to reverse a recent decision by the parish authorities to cancel Permissive Bridle access over Cherhill footpath 27. It was reported that permissive rights had been in existence for approximately 30yrs without any interruption or objection. This closure would force any rider travelling east-west and vice versa onto the busy A4 trunk road, a two lane highway restricted only by a 40mph limit.

I, as WBA chairman attended Cherhill Parish Council meeting on Tue 31 Jul 18 at which it was disclosed that the situation had already been resolved and permissive bridle rights restored.

I would like to make it clear that at no stage have WBA suggested that anyone had complained, and reference to the WBA newsletter, Sep 2018, is totally inaccurate and offensive.  At this stage it is felt appropriate that the author of the FB article of Thu 20 Sep 18 should publish a Public Apology and retract the entry.

WBA committiee members are all volunteers who work consistently to protect riders rights and promote safe off road riding throughout Wiltshire. By getting involved with the WBA riders can actively influence outcomes and support their local riding community. We welcome new members and commitee members at any time who will work with us to protect and preserve our riding routes across the county.

Norman Beardsley
Chairman
Withshire Bridleways Association
There are many benefits of becoming a committee member or an Area Representative. Prioritization of issue resolution in your area, fantastic knowledgeable support from existing experienced committee members, inclusion in all WBA meetings and copies of meeting minutes i.e. total awareness of all issues, connections with influential decision makers, ability to offer your localised community support and being happy in the knowledge that you are contributing to preserving bridleways in your local vicinity for everyone.
If you can volunteer to support us and in turn your local riders, please get in touch here

I am often alone when I ride on the West Chisenbury to Gore Cross section of the Salisbury Plain, which I find odd as it is so fantastic to ride up there so to give you an idea of what you might enjoy if you boxed up here is jJust a short section of a long ride that takes in a bit of the bridleways and byways on Salisbury Plain. The GoPro is on my chest and doesn't see how much I actually look about (be glad, it would be nauseating) and the volume is muted but you can tell when the tanks fire and oh boy, they were very loud that day!
Here’s hoping we inspire some more equestrian riders to use the excellent bridleways and byways around Salisbury Plain and promote The Wiltshire Bridleway Association by becoming Supporters.

Our Newsletters are quarterly bundles of equine and bridleway knowledge.
Available only to supporters who will get first choice on rides, offers & riding maps

Our newsletter is sent directly to supporters by email (preferably) or in the post. Make sure you become a supporter to receive your copy and get the latest news directly.

We are busy on your behalf! Please become a supporter of our work to maintain and protect
the bridleways you use and enjoy. It costs just £12 for the year.
These funds help us fight to keep routes under threat open and preserved for the future.